That potato brew looks similar to pulque which is potentially the most awful thing I've ever tasted! I hope it's better than it looks! :)

HalsteadMills said:
10l plastic keg (which I hope will hold pressure for once)
Click to expand... 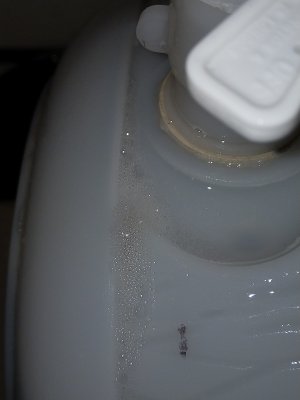 Sorry to go a little off topic, but I was born and spent my childhood years in Halstead.
Your previous brew name - The Flowers at Box Mill brought back some fine memories of summers spent catching sticklebacks in the river at Box Mill!

Tractorboy said:
Sorry to go a little off topic, but I was born and spent my childhood years in Halstead.
Your previous brew name - The Flowers at Box Mill brought back some fine memories of summers spent catching sticklebacks in the river at Box Mill!
Click to expand...

It's a nice town, moved here nearly 20 years ago when it had lots of independent restaurants and shops.

The beer recipe was inspired by 1955 Flowers IPA (although I threw the last EKG addition all over the garage floor so used Cascade), the bottle was nice so I will crack the keg next weekend.

Can I assume you follow Ipswich? I think the early end may save our season...

Teach me to short cut. Didn't dismantle tap and it leaked. Replaced, added some more sugar and this morning heard a pleasing faint hiss from prv (rubber band!). Bottoms buckling so good sign 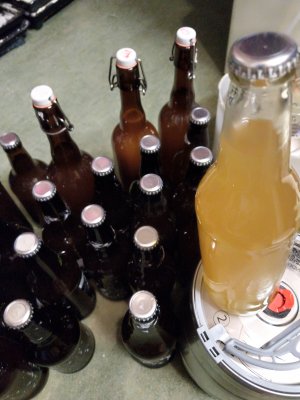 That's everything full and me done for summer

Will clean and "pasivate" the kettle next week and store until September.

Plenty to drink at least

Radioactive Waste - hazy experimental beer ready today.
Smells "pleasant", bizarre not sure how else to describe it.
Not too bitter, definite grapefruit and herb from hops. Ends with a little heat from the cayenne but not strong.
This is a really nice beer if not unusual.
It was designed to glow, do you think it does? 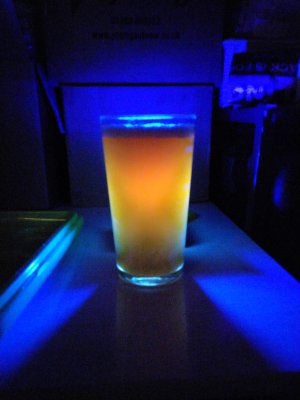 Garage at 23C so set up the home made jockey box to cool the Flowers at Box Mill: 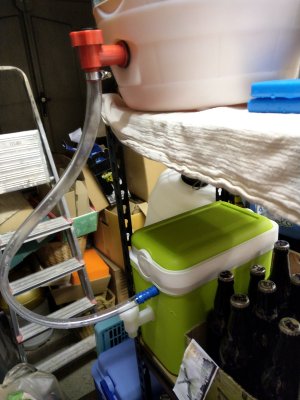 Arrrrggghh, despite care and checking no pressure at all in the plastic barrel. Added some sugar, sealed up, still nothing. Will drink others over the weekend to free up bottles to move it next week.
That's the end of plastic barrels for me... Repurpose as bottling bucket...
Have one more PB full so try the jockey box with that maybe...

HalsteadMills said:
That's everything full and me done for summer

Check out the weather forecast. With temp down going to sneak in a brew on Friday - GH Summer Ale tweaked to try and get close to Wainwright.
Maybe a second next week with CML Belgian yeast which says it will work to 28C.
Bonus brew time

HalsteadMills said:
GH Summer Ale tweaked to try and get close to Wainwright.
Click to expand...

Trying a couple of things today. I always boil the water a day or so before to drive off lime scale & chlorine. Added campden tablet too for first time.

Stuck mash, don't know why. The draining mash started boiling... I know this is actually air being released from the grain but it was fascinating to watch (sad??) 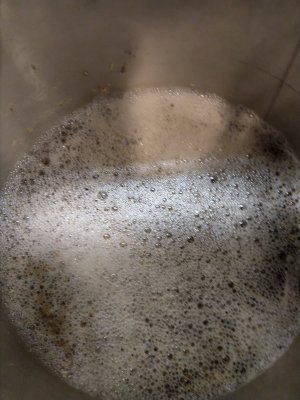 I have always used CML yeasts so thought I would split the wort in two small fermenters, add CML Real Ale to one and S04 to the other. Amazing the visual difference 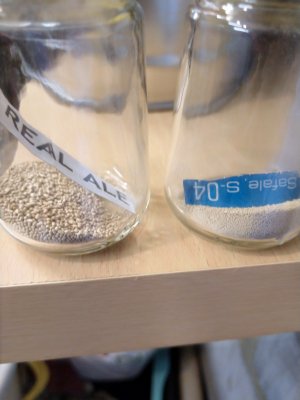 Panic - the fvs are about 20l total and for some unknown reason thought that there was plenty of space for the 21ish l batch. Quickly squirted a DJ with antibac and filled with boiling water. Only 1/4 filled it so squeezed it into the fvs 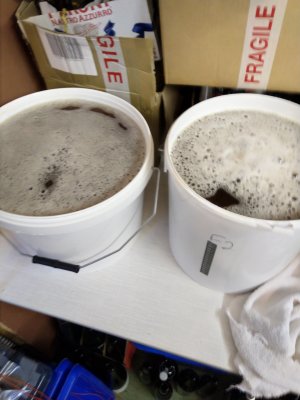 Managed to cool to 23, would normally pitch the CML yeast but having seen some comments about S04 not liking anything over 20 so just waiting for it to cool. Will pitch and wait for the mess that follows from the overfilled fvs...

OG 8 points higher than expected! 84% efficiency! Was down at 65 a couple of months ago so my changes appear to be working.