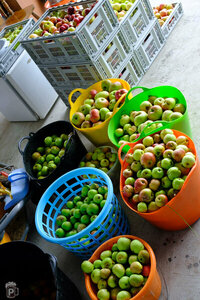 I'm not sure about that last one to be honest. I know that starters are there to build the yeast up and train it to digest maltose, and that fructose is much more readily digestible, but I've seen some fantastic fermentation when using Kveik in my beers and want to see what happens when I unleash it on some cider. Another reason for going this route is that I want to overbuild the starter and dry then freeze some yeast before it spends too long in my fridge, having sat there patiently most of the summer. We're also in the lucky position of having more apples than we know what to do with - this year's first harvest resulted in around 200 bottles of pasteurised apple juice, and we've still got cider left over from last year, so I'm not too worried about sacrificing a bucket or two in the name of experimentation. 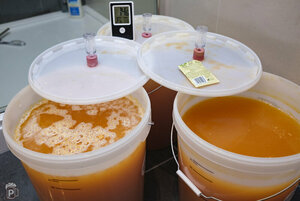 The bucket on the left is the one with the M02 starter, the one on the right was dry-pitched M02. Both are popping their airlocks at the same rate, but I rather like the foam on the first one. With that ...

All three buckets each had 2 crushed & dissolved Campden tablets added the morning after they were pressed, because unlike last year I want to suppress the natural yeast and use something else. I'm told it's best to wait at least 24 hours after adding Campden before pitching yeast, and where the M02 is concerned I waited 4 days before dry-pitching one and 6 days before throwing the starter in t'other. A this point I hadn't even begun making the Kveik starter for my third bucket, and now that it's been 7 days since Campden it's started bubbling again. So my question is: do I add more Campden now or shall I leave it alone until I pitch the starter in 36 - 48 hours time?

Many thanks in advance for any guidance. I'll endeavour to pop back here with updates at key moments, but if you want to peek over my shoulder and see daily progress then you can see my rough notes for the brews here: Best Wellies (dry-pitched M02), Allotment Riot (M02 starter) and Trip to Oslo (Kveik starter).