Today I took the first step towards all grain with a partial mash.
I was trying out the secondhand induction hob and 27 l stainless steel pan I recently picked up ( also got a copper wort chiller )
to make an American Pale mini mash kit from the Malt Miller.

(15gm each Mosaic,Simcoe,Citra for dry hopping )

The hob is fairly basic but has a warming setting at 60 c, a boiling setting and a frying setting which can be set between 80 - 240 c.
I was able to mantain a reasonably consistent 65 c for the mash and boiling was straightforward.
OG was on the mark at 1050, expected to finish 1010 for 5% abv.
Now sitting in my new mark 2 brewfridge which has room for two fermenters.
I am now looking at an all grain kit as my next brew.


I also have a Klarstein Mundschenk ( like the Maischfest but with a recirculation pump )on order which I picked up for £ 190 as B stock
but not sure when It'll be delivered, likely to be at least 4 - 6 weeks.
I'm in no rush though and enjoying learning the ropes, for now. 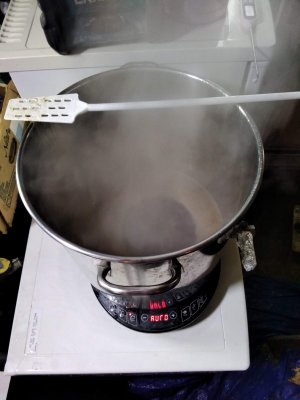 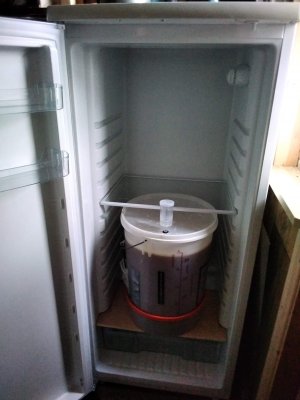 Citra, mosaic, simcoe by far my fave hops great combo.When i use them normally dump 60g of each in dry hop for 23ltrs of ipa.
Dark rock brewing do some nice all grain kits, worth a look and they are all great quality.

chillipickle said:
Citra, mosaic, simcoe by far my fave hops great combo.When i use them normally dump 60g of each in dry hop for 23ltrs of ipa.
Dark rock brewing do some nice all grain kits, worth a look and they are all great quality.
Click to expand...

Yeh, I was looking at the Dark Rock all grain kits, they have some clone recipes which look very tasty !

Yesterday I barreled the partial mash American Pale, it finished a little high at 1.012 but the OG was
a point above predicted so attenuation was respectable with ABV a shade under 5%.
Sample tasted fantastic !

With the fridge now free I got on with my first attempt at all grain BIAB no sparge.
I scaled down a Jon Finch recipe I saw on Malt miller to 10 litres to see how my pan/induction hob
coped with a larger boil.
I also realised that my pan is bigger than I'd thought ( advertised as 27 L, actually 38 L )after measuring
( using pi x r sq x h ) so at 8 gallons a bigger batch of around 20l should be manageable ?

It took half an hour to heat water ( which I'd treated with 1/3 spoon campden powder ) and drop back
to mash temp, I wrapped the pot in a padded bed roll and gave it an occasional stir.
Kept a check and managed a reasonably consistent 65c, the hob has a warm setting at 60c so I could
give it a little boost if needed.

After mashing I drained the bag with a bit of a squeeze but after reading how it can cause haziness
I didn't go too mad - hard to resist the desire to wring every drop out of it !
It took 40 mins to get to a boil, although probably would have been quicker if I hadn't kept lifting the lid
to have a look.
10gm Hop additions went in as recipe at 60 and 10 mins and then after the boil to stand.
I ended up with just under the target 10 L which I was happy with.
I was a little concerned about lack of clarity in the wort, a little soupy if anything so I decided
for better or worse to strain it through a sieve and muslin cloth, into the fv.
Now think what I was looking at during the boil was hop debris, hoping it wasn't a bad
decision as the bittering had been achieved. 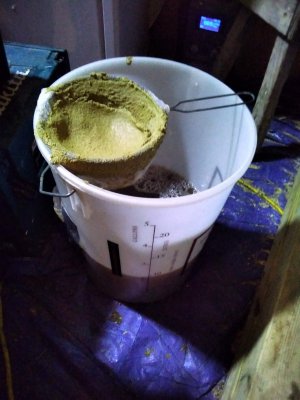 I forgot to put my wort chiller in the boil to sterilise so ended up deciding to do an overnight chill.
Checked the gravity this morning, a little higher than predicted at 1.060.
Pitched the safale US -05 at 18c and stuck it in the fridge
A little later I wondered if I should have made up a little of the short volume with some extra water
and dropped the ABV a touch.

All in all pretty happy with how it went, I have another 2.5kg of the Extra Pale Maris Otter to do
another similar sized batch this time it'll be an American Pale Ale with Cascade.
My new fridge has space for two fermenters so plan is to get a couple of batches on at the same time
and use the old small fridge for cold crashing.

Edit. I updated the IPA recipe on Brewfather as I overdid it a little with the grain and it amended
the OG to 1057 and FG to 1.012 so fairly spot on. Smaller volume post boil may account
for slightly higher actual OG.
Last edited: Feb 24, 2021

Yesterday I brewed my second AG batch with the over half of the Maris Otter.
This time I used Cascade.
Other than that it's the same recipe although 11 L this time for a slightly lower ABV.
Last time volume was slightly short so I rounded up Brewfather's 15.49 L to 16 L.


Took a bit longer to get to temp with extra 1.5 L this time, around 50 mins.
I think the mash was overall warmer than last time, been reading up a little on this and
understand it can produce less fermentable sugars and sweeter beer so will be a comparison
to make with the first batch of IPA.

I left it to cool overnight, then this morning at 20c I strained the wort into fv.
Somehow I ended up with 12.5 L this time, think must be a steadier boil than last time.
Starting gravity was 1.049 so a little short, but volume was approx 1.5 L up so about right.


It's now in my new double brewfridge. I have a belt for each fv on a double socket and
I moved the probe from batch 1 ( day 7 ) to batch 2.
I moved the belt up off brew 1 in case of fermentation temp spike in new brew,
but it's happily carrying on regardless. 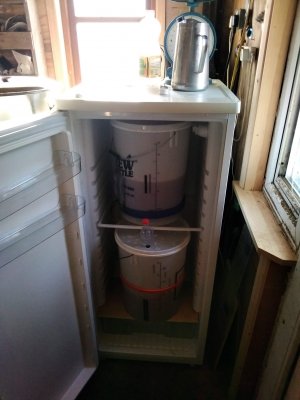 At the start of the week I bottled my first all grain batch, an American IPA.
Finished a point lower than predicted at 1.011, looked a bit murky but is already dropping and clearing.
A bit stronger than expected at 6% although volume was a little short.
Tasted and smelt very promising.


Did my third all grain brew yesterday, BIAB no sparge as before.


Decided to try my gas burner this time and it was quicker to heat the mash water and generally easier
to keep in control of the temperature.
I had a new, finer grain bag which was a little big so I sat it inside the old one which kept it off the bottom.
Also tried out a hop spider, which together with the bag seemed to produce a clearer wort although
I could still see what I took to be proteins floating about, looking a bit soupy still.
I used a third of a protofloc tablet for first time so hoping I'll see a difference in the finished beer.
The volume was slightly over again at 11.5 L although OG was a bit down at 1.051 .
I only gave the bag a light squeeze this time so perhaps that would have made a difference.
Next time I might give the boil another 15 mins for good measure.
Left it to cool overnight, pitched NBS ale yeast at 20c and now in the fridge.


I took the opportunity to check the gravity of batch 2, American pale which at day 9 had reached the
predicted 1.010 so I dry hopped with Cascade and put it back in the fridge for 3 days until cold crashing
at weekend.

Next up is another English type bitter with the other half of the malts/hops I have as above
- any suggestions ?
Last edited: Mar 25, 2021

Another similar recipe to previous ESB, just using the EKG this time.

Used the stove again with both rings this time.
Got to mash temp quicker in 38 mins and only 19 mins after mash to reach boiling
Hit volume and gravity as predicted, so feel quite dialled in to the Brewfather settings
now.
Used my wort chiller for first time, took about 20 mins then pitched at around 19c.

Got the ESB cold crashing, will probably bottle it tomorrow - 11L is much less hassle than a full 23L !
Thinking of trying a 2 Gallon PB for this batch.
Although judging by regular use my beers seem to carbonate pretty quick in the barrel and I'm sure any
headspace would get filled by co2 pretty quick with secondary fermentation.