My Claim to Fame

For those who don’t know, this was a running gag on ‘Wake Up to Wogan’, where people with strange names like Mick Sturbs, Norma Stitts, or Rudolph Hart, wrote in with their ‘Claim to Fame’ – like they once had their foot trodden on by Henry Cooper, or had once stood in the next urinal to Frank Sinatra.

In the early sixties Tin Pan Alley hijacked the type of music my contemporaries had to search for a decade earlier, and what they now called Trad Jazz was all over the place like a rash. One of the new bands, following in the furrows originally ploughed by the likes of Ken Collier and Chris Barber, was appearing at Plymouth Guildhall, and nipping into the bar for a pre-concert snifter I was surprised to see the Clarinet player sitting alone at the bar, while the rest of his band were laughing together at the other end of the room.

I felt a bit sorry for him, and years later Terry Wogan informed his millions of Radio 2 listeners that the strangely-named Eddie Stonelight’s Claim to Fame, was that he had once bought Acker Bilk a Gin and Lime.

(There you are Clint, I’ve baited the hook. I wonder if we get any bites?)

Nice one CD!
As mentioned,when I worked in the glasses factory we had a visit from Patrick Moore of The Sky at Night fame. He was in town for a science fair at the college. I made the glass lens for his monacle on the CNC machine I ran. I got to meet him too and marvelled at how much dinner he had stuck to his tie!
Many years ago a mate of mine had a motorbike so we decided to go from North Wales down to Epsom to see his dad...this we did in a day but travelling home in the early hours it tipped down so we took a break at the Little Chef in Oswestry. We got some tea and sat down,the place was empty except for four sat on the next table...it was Bucks Fizz the pop group!!
I also met John Wilson ,Go Fishing fame...he was a right misery. Strange really as on telly he was always laughing his head off.

to mention just a few...

... I also once snogged Hazel O'connor!

to mention just a few...

... I also once snogged Hazel O'connor!
Click to expand...

I once shared a lift (as in elevator, not hitch hiking) with Gary Rhodes.
I had a pint with Captain Sensible before a gig (the Damned, not my band...we never got to play a gig).
I past Ted Heath out for a stroll with his private detective in Kew Gardens
I saw Rhodri Morgan coming out of the local Coop and said "hello" without noticing who it was. It was only later that I realised.
I was in HMV in Cardiff buying a CD and getting cross because there was a long queue and lots of people fussing around some scruffy little git by the tills. I later realised it was Kelly Jones of the Stereophonics.

My dad was called Roger Bannister and he was a chauffer to Larry Grayson, I met him on odd occasions, never met Larry though

I met Gary Rhodes too once. He owns a Restaurant (Rhodes 2010) in the hotel I was staying in in Dubai. But I met him in the Sports Bar next door where he was having a Burger and Chips watching Man U play on the TV!

Benfleet Brewery said:
I met Gary Rhodes too once. He owns a Restaurant (Rhodes 2010) in the hotel I was staying in in Dubai. But I met him in the Sports Bar next door where he was having a Burger and Chips watching Man U play on the TV!
Click to expand...

"owned", he passed away a few years ago.

Back in the 90's I was going through Heathrow Terminal 5 on the way somewhere, accompanied by a rather down-to-earth colleague. We were just going through the security barriers when I pointed out to my colleague that the guy behind us was George Michael. His reply (not very quietly) was "well he'd better stay away from me or I'll ruddy wake 'im up before 'e go-goes"

A local blues club had an unknown band called Thin Lizzy playing one night. After the gig in the bar we heard Phil Lynott working out if he could afford a pint so my friend Gary offered to buy him one and we chatted with for him for 1/2 hour or so. Lovely bloke

RichardM said:
"owned", he passed away a few years ago.
Click to expand...

I was on telly with Carol Vorderman, she IS a babe.

Before a gig at the Marquee club I was sitting near the back having a drink. There was a guy sitting next to me and my friend, who people kept coming over and chatting to. We didn't have a clue who he was. Later in the evening Alexis Korner, (it was him we'd gone to see) welcomed a special guest on to the stage, Geno Washington. My mate and I turned to each other and said "that's the guy we were sat next to".

Much earlier in the evening, we were in a pub up the road, stood at the bar with Ian Stewart, former Rolling Stones keyboard player. He was also a special guest that night.

I caught a big fish in 1990 and was in the local press, a whole host of angling magazines, and topped off with Daily Star Young Fisherman of the Week which came with a fishing rod as a prize. It was a 10lb9oz Rainbow Trout out of Westlow Mere in Congleton, caught with a Montana nymph fly. It is too date the first and only fishing trip I’ve been on, I retired on a high.
Also, check out the shell suit, it’s special. 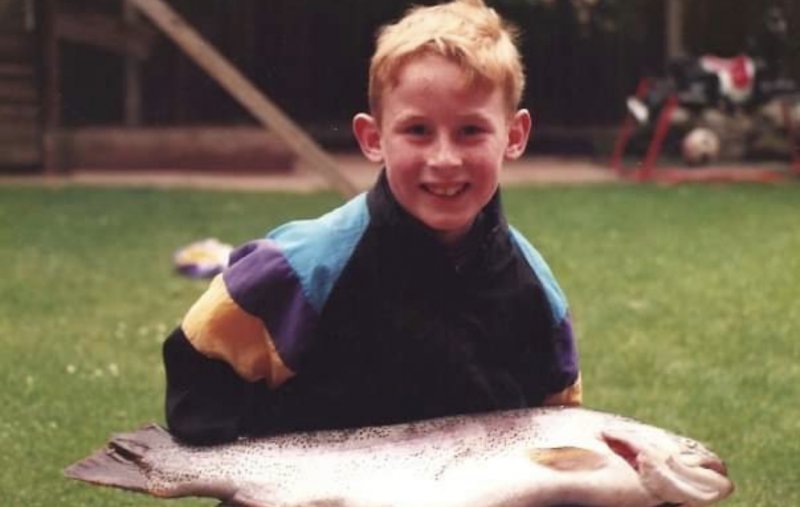 In about 1980 ,when he was famous, I was in the same queue for the Hard Rock in London as Kelly Moneith

Me and a mate did tequilas with Paul Young and his manager.

I walked past Eric Pollard (emmerdale character) the other day.

Apart from my family and beer, my two biggest loves are comedy and magic so I still regret so badly not saying hello to Tommy Cooper as I stood next to him in a shop in Chiswick years ago. I was nine at the time!

RichardM said:
"owned", he passed away a few years ago.
Click to expand...

That passed me by ! Did'nt know as i was in hospital myself after a motorcycle accident.
I won a Scottish superbike race at Knockhill the first and only time i've used wet tyres.
You must log in or register to reply here.
Share:
Facebook Twitter Reddit Pinterest Tumblr WhatsApp Email Link