This is not a thread about how the government have handled lockdown and any posts that do not answer the question above and stray off topic will be removed.

The number of firms that notified the government in June about plans to cut 20 or more jobs was five times higher than in the same month last year, figures obtained by the BBC show.

A Freedom of Information request shows that in June 1,778 firms said were intending to cut more than 139,000 jobs in England, Wales and Scotland.

The cuts came as coronavirus wiped more than a quarter off UK economic output.

The figures give an insight into the surge of redundancies announced since coronavirus blighted the UK.

Airbus, Royal Mail, the airport services group Swissport, HSBC, Centrica and the Restaurant Group, owner of Frankie and Benny's, were among the businesses to announce redundancy plans in June.

Firms planning to make 20 or more staff redundant have to notify the government by filing a form called an HR1 Advance Notice of Redundancy.

The number of these forms filed with the Insolvency Service shows a steep rise in the number of firms planning to cut staff.

Though the June figure excludes information from 79 firms, which was not available when the numbers were compiled, it shows a steep rise in the number of positions being considered for redundancy.

A Freedom of Information request shows a rapid rise in firms in June saying they were cutting staff. 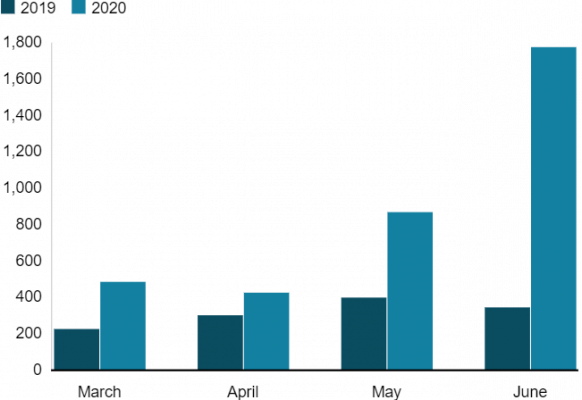 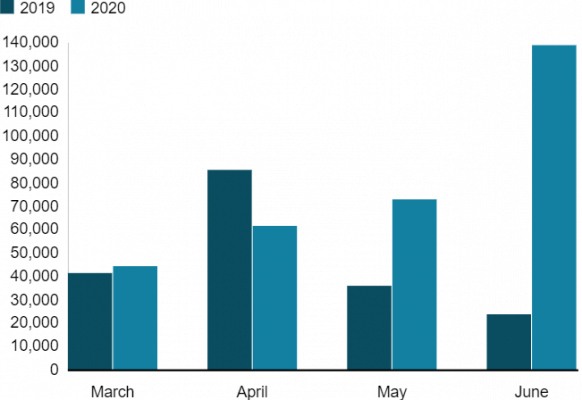 Thankfully my employer has went to great lengths to keep factories open worldwide due to the nature of the manufacturing requirements but that won't help if there is a downturn is global business demands.
My daughter works part-time permanent at the Cinema and although contracted for 20 hrs a week she has only completed one full shift in three weeks as she has been sent home early due to the reluctance of cinema goers and lack of movies available.
My wife starts back tomorrow after shielding and she is nervous as she works with adults with learning disabilities and they have had to rearrange how they provide a service to their clients.
I would say the high Street shops and wet pubs here are going to be the hardest hit but it will certainly be challenging times for many to come.

It's possible I might get affected. I should add that I've not been on furlough but we have a contract up for renewal. I would get enough redundancy to see me through 5 months or so and at some point I am looking to slow down anyway so wouldn't be that fussy about what a potential next job might be.
Last edited: Aug 9, 2020

I will post my request from the OP again -

This is not a thread about how the government have handled lockdown and any posts that do not answer the question above and stray off topic will be removed.
Click to expand...

Me the Mrs and my Son are not in sectors that will be effected. I'm looking to retire anyways...

My Daughter and her boyfriend are in Hospitality so are less secure, although top gear did visit her workplace this week for some filming. So her place is doing Ok.

The company I work for has sold the divisions I work in to another, and it's likely that I will loose my job in the long term as apparently my role doesn't exist in the new company. So it's concerning that this might be happening at a time of high unemployment. Luckily, wifey's job appears safe so we will have some money coming in.

I was called back to work on 1st July after three months off. We are on schedule to have a record year even without those three months. Don’t know how tbh but we are lucky. We have an advantage over our competitors in as much as we don’t have any debt and don’t pay rent.

I work for a charity and our funders agreed back in March to keep paying so we’ve worked right through. With 2 1/2 years (+1 +1) I should be ok. We’re going to be busier than ever in the next 12 months supporting people to get themselves back where they were!

This is not a thread about how the government have handled lockdown and any posts that do not answer the question above and stray off topic will be removed.
Click to expand...

Neither Mrs MQ nor myself have been furloughed. I went into work all throughout the pandemic and MrsMQ as been working at home

The company I work for has already announced there will be job cuts, I don't know if I will be affected by this.
What they are also trying to do is reduce workers benefits, increase working hours for no extra pay and also scrap the negotiated redundancy agreements. I personally think some companies are just using the current situation to take the pee.

I was made Redundant last October, well before the pandemic, which means I have had no furlough and no earnings.

Sadly I am a victim of enforced redundancy.

Received official notice on Friday 31st July. I had been furloughed since 18th March and as the government changed the criteria of the furlough scheme in that employer's would have to pay NIS and pension contributions, the company felt that they could no longer sustain the impact of extra outgoings on retained staff and consequently made some 42 staff redundant. I was one of 11 drivers at a Fine Food company supplying Cruise Ships, Events, Stadia, Hotels, Schools, Colleges and Universities, all of which have been hit hard by the pandemic.

I am currently looking for employment but it is hard as there are more than 20 times the applicants for each advertised job.

The missus works in healthcare, I in education, so we're good here.

I'm pretty much retired, just a part time sheep farmer now, so not affected yet but won't be happy when this years lambs go to market as last I heard prices had plummetted.
The Mrs has been on furlough but has restarted work - she's a domicilary care worker. If there's a second wave though I think she'll just retire.

MyQul said:
Neither Mrs MQ nor myself have been furloughed. I went into work all throughout the pandemic and MrsMQ as been working at home
Click to expand...

Some of our 'satellite' services (e.g. we had a cafe) have shut down and people made redundant. None of the outreach support workers like me (which is the core of the company I work for) have or are being made redundant
Last edited: Aug 10, 2020

My firm furloughed about 10% of staff, the rest of us got a temporary pay cut but worked full time at home. There’s now been a few redundancies but I have survived. I can’t imagine there would be more redundancies without compromising the ability to get work done, guess we need to see how the economy recovers.

I was made redundant in March from the construction industry just as the outbreak was in commencing. OAP in December so will leave any job applications for those that have families. Other people have suffered the same fate since.
Wife in retail and worked through but the company(has a homebrew section mentioned may times on the forum) is changing how they do things in store and her hours have altered to" suit the needs of the business".
The trend is happening throughout many areas due to how people have changed their purchasing of goods. I believe there is a way to go as companies look to save money.

Galena said:
I was made Redundant last October, well before the pandemic, which means I have had no furlough and no earnings.
Click to expand...

Snap, I got made redundant along with 135 others in November last year. Was applying for jobs like crazy and had the 3rd interview for a job in March on the Friday before the Tuesday when lockdown started, would have got it too if it hadn't been for that pesky virus. Now considering re-training and doing something different, but age is against me...