So I got a bit bored and decided to take a look at whirlpooling. A few recipes I am looking at brewing call for whirlpool additions with up to 30mins whirlpooling.
I do a limited whirlpool with a large spoon to create a hop cone (pellets) to aid run-off but I ain't standing there for 30 mins spinning a spoon LoL.
First attempt was with a pump to create a whirlpool, but after a trial the pump wasn't really up to it and I was looking at a lot of extra cleaning (not good).
So a bit of extra head scratching and I found a Grainfather whirlpool paddle (no I won't be running it at full bore like the video's LoL). I don't want to add any air at high temp after the boil so had a look at powering via a 12v motor and pulley system to just get the whirlpool hops circulating.
A few eBay purchases later and the system came together. (I already had a 12v motor speed controller)
Tried it last Friday and it works a dream. Will be interesting to see how the beer turns out 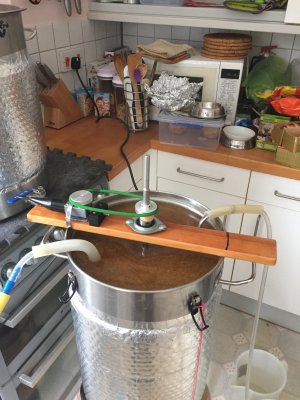