The full article is here -

The retail giant joins a growing list of firms changing their rules as staff absences and costs begin to bite.
www.bbc.co.uk

Hop_it said:
I guess that there will be a lot of IKEA employees looking very closely at their contracts of employment.
Click to expand...

I would imagine their contracts don't guarantee full sick pay as they would be stupid to try this if they did.

very few retail companies guarantee full pay it is usually Statutory Sickness Benefit or paid at discretion of senior management. I get upto 4 weeks with full pay but it is not guaranteed (not in the contract of employment)and is discretionary with management approval

the baron said:
very few retail companies guarantee full pay it is usually Statutory Sickness Benefit or paid at discretion of senior management. I get upto 4 weeks with full pay but it is not guaranteed (not in the contract of employment)and is discretionary with management approval
Click to expand...

In other words if you are a good attender they usually pay but if you knock/miss shifts too often they may not. My employers did tell us a few months ago that it would be SS for isolation unless you have actually contracted Covid then they would pay

I'm in retail. Haven't had a day off sick since I started nearly 8 years ago. I would only get SSP.

Where do I get an IKEA application form?!!

Is Boris going to wheedle his way out of this one, if he was there as they are saying he was has he got to go?

On Monday, ITV published a leaked email from the prime minister's principal private secretary, Martin Reynolds, inviting 100 staff to "socially distanced drinks in the No 10 garden" on 20 May 2020.
Sent when lockdown rules preventing large gatherings were in place, it encouraged people to "bring your own booze" and "make the most of the lovely weather".
Click to expand...

Boris Johnson "can run, but can't hide" from allegations he attended lockdown drinks in the Downing Street garden, Labour's Angela Rayner has said.
Speaking in the Commons, the party's deputy leader demanded answers over the alleged gathering on 20 May 2020.
Minister Michael Ellis, standing in for Mr Johnson, said "a fair and impartial investigation" had to take place before any conclusions could be made.
But several senior Conservatives have also called for answers from the PM.
Mr Ellis said the inquiry into the drinks party and other gatherings on government premises during Covid restrictions - led by senior civil servant Sue Gray - should be "swift".
But he warned it could be "paused" if the Metropolitan Police - which says it is in contact with the government over "widespread reporting relating to alleged breaches" of Covid rules - decided to carry out its own investigation.

On Monday, ITV published a leaked email from the prime minister's principal private secretary, Martin Reynolds, inviting 100 staff to "socially distanced drinks in the No 10 garden" on 20 May 2020.
Sent when lockdown rules preventing large gatherings were in place, it encouraged people to "bring your own booze" and "make the most of the lovely weather".
Witnesses told the BBC the PM and his wife Carrie had been among about 30 people who attended the drinks, but Mr Johnson has declined to confirm or deny this.
Several Conservative politicians have voiced their anger, with the party's Scottish leader, Douglas Ross, saying Mr Johnson should resign if he "broke the law".
"People gave up so much and they're now seeing at the exact same time, potentially, those at the top in No 10 were enjoying the weather and having a drink in the garden," he told the BBC.
"I can't answer the question 'Was the prime minister there?' He can, and the public deserve that answer," Mr Ross added.

Conservative former minister Johnny Mercer tweeted about the drinks gathering: "It's humiliating, and does not reflect the majority of my colleagues who 'at least try' and lead by example."
Another ex-minister told the BBC that Mr Johnson "tries to lie his way out of everything", while another said: "Boris is finished."
And SNP Westminster leader Ian Blackford called on Conservative MPs to "force [the PM] from office" if he did not "do the decent thing" and resign.
The PM's official spokesman refused to comment on claims surrounding the drinks event while the investigation was taking place, but he added that the prime minister retained full confidence in Mr Reynolds.

In the Commons, Labour MPs lined up to attack the government over the allegations.
Ms Rayner said it was disappointing that Mr Johnson was not there in person to respond, adding: "But his absence speaks volumes, as do his smirks on the media.
"The public has already drawn its own conclusions. He can run, but he can't hide."
Few Conservative MPs turned up to show support for Mr Johnson, but one of those who did, Suzanne Webb, said: "The time of the House is better spent at this moment in time, as we recover from this pandemic... debating how we can build back better and level up."
Other opposition parties joined Labour's criticism, with the DUP's Jim Shannon brought to tears when speaking of the death of his mother-in-law during the pandemic.


Liberal Democrat leader Sir Ed Davey said: "Will the minister set out what he thinks should happen if a Conservative MP is found to have flouted and broken a Covid law?"
Mr Ellis replied that it was not for him to "pass judgement or to pass sentence".
"The natural order of justice [is] a fair and impartial investigation takes place before there is a judge jury and executioner," he added, "That investigation needs to take its natural course in an orderly way."
Meanwhile, Hannah Brady, a spokeswoman for the Covid-19 Bereaved Families for Justice group, has written to the prime minister, saying he appeared to be treating the issue of the 20 May drinks as "one big joke".

Angela Rayner pushes for answers over lockdown garden drinks at No 10, as MPs pile pressure on the PM.
www.bbc.co.uk
Last edited: Jan 11, 2022

Chippy_Tea said:
Mr Ellis replied that it was not for him to "pass judgement or to pass sentence".
"The natural order of justice [is] a fair and impartial investigation takes place before there is a judge jury and executioner," he added
Click to expand...

Blimey, I know a) people are upset and b) some Tories are keen to bring back the death penalty, but execution seems a bit OTT.

Has my boys 10 and 12 friday sat and sunday, dropped them back to their mother sunday evening instead of school drop off as I usually do..

Monday youngest wakes up with temp and headache. eldest is fine.. both test + on LFT and then pcr.

Yesterday role reversal eldest not well youngest better than he was..

Both mother and myself so far are negative. I do not live with her so I am thinking if I am still negative by Friday I am unlikely to get it then. I suspect they bought it in from school so probably end of last week..

We are quite affectionate hugging high fives after bowling and cuddling on sofa sharing crisp bags etc.. There is no way we have no cross contaminated so maybe I am thinking or hopeful that so far the booster has been enough to keep this at bay from it infecting me.. But I guess we will see.

The sad thing is that the Tories know he's not going to resign, and they can keep slipping out party stories to cover up the bigger issues... Luke the fact that that they issued contacts worth hundreds of millions to their buddies.

A judge says it was unlawful to give two companies preferential treatment when awarding PPE contracts.
www.bbc.co.uk

Partygate is just a sideshow to distract you from the real issues. The Tories have a VERY good PR machine 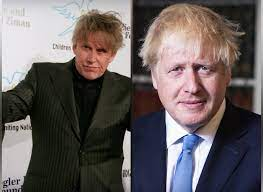 I got your guy right here. Gary Busey.

Hop_it said:
'The Rise and Fall of Boris Johnson'
Click to expand...

Two poll results this morning before PMQ's said 4/1 and 3/1 people who think he has done a good job and would voter for him again.

They are now saying 66% of voters say he should stand down but it doesn't say if that's tory or all voters.
Last edited: Wednesday at 8:43 AM

Just give him a shabby suit and an Eton educated accent, and he will be perfect

"Boris Johbson is under increasing pressure"
He isn't though is he?
He's nice and comfy somewhere with his bottle of wine, giving absolutely no shits.
Last edited: Wednesday at 11:12 AM

Well quite. He purged the parliamentary party after he unlawfully prorogued parliament and is now surrounded by lick-spittle sycophants who he and the Tory government will continue to reward for their obedience. Just wait for the economic covid recovery package he will magic off those money trees into the pockets of the brown nosers.

"World beating" by the way.

I’ve heard that the 1922 Committee are meeting to discuss Boris Johnson’s future. It’s a bring a bottle work meeting!