I have restarted homebrewing this year after an absence of over 30 years.

My first few kits have all been Mangrove Jacks and they have been brilliant. Lovely taste and very clear. However, one of my latest was a Juicy IPA which meant I had to add a packet of hops at the end of it, which I duly carried out. It has now been bottled for the best part of 2 months and although it is a very, very tasty brew, it is extremely cloudy.
I have since made a "Simply" lager and decided to add some El Dorado hops at the end of the brew but it too, has remained cloudy, despite me using finings this time.
I am extremely disappointed with the finished article of these two and I think I will just have to go back to making these kits without the addition of the dry hops. I must stress that this is not a complaint with Mangrove Jacks as they are a great kit and I will continue to use them but if anybody can offer advice on how to make them crystal clear, I'd appreciate your knowledge.

What is the quantity of hops you are adding as a dry hop I presume?
T

The first one came with the kit [Mangrove Jacks Juicy IPA] and that was 50 grams.
The second I added myself [Thinking it would turn a bland lager into one with more flavour and aroma] and this was only about 30 grams.

I would think maybe the Juicy would never clear properly but I have never brewed it. The second should have cleared with just a cold crash as a rule. Did you remove the hops after dry hopping?
T

I can't cold crash [Had to look that up]. I put the hops in at the end of fermentation and left them for a few days before bottling direct from the fermentation vessel. Is this incorrect ?

As above are saying to get hops to drop out you really need to remove them by letting them settle. This is not what fine hop particles want to do if warm.
Also hops have an enzyme that can break down big sugars into those that yeast can use so hop " contaminated " bottles can get more ferment than you planned on. This is called Hop Creep and worth reading up.
Try putting a bottle in the fridge for a week or two where it can stay still and see if any settling occurs. I agree the juicy IPA likely always to be cloudy that's the style look up Hazy IPA or NEIPA and they really should be cloudy. Picture attached of my latest.
Regarding the lager how cloudy is it? Does it diminish when it warms up ? There is something called chill haze that will disappear if lagered ( ie kept cold for weeks / months ) and can be reduced with different fining agents such as Super F, Biafine and clarity ferm. Clarity Ferm is added during the ferment and also reduces gluten in the beer. Super F and Biafine added when beer chilled a few days before packaging.
Next time could try the different fining agents administered cold perhaps just wrap the fermenter up and put ice blocks ( milk cartons with frozen water ) around it and change them as needed. Okay for the hops to be in several days at say 17 c or below then chill and then pull them out if in a bag ( leave a string on it for this ) and then apply finings.
Don't be disheartened Lager is really difficult to make and yet it looks so simple, same with Hazy IPA. Some yeasts as well float around more than others could try a Kveik yeast they like it warm say 25 Celsius plus and drop like a stone when finished and cooled a bit. It's what I use for lagers during warm weather. 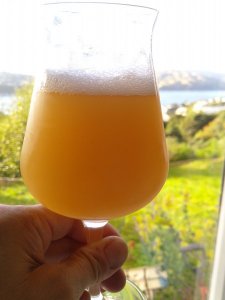 No you need to cold crash to get the hops to settle out at the bottom or use a hop bag to so that you can remove them. It sounds like you have not let the hops settle out and some of the hop residue has been transferred into the bottle which could be causing the issue.
Most people can cold crash in a fashion by using the coldest room you have usually a garage. It is possible to crash in one of those plastic flexible trub/laundry basket by standing the fermentor in it with water and ice to cool it down. Some brewers freeze bottles of water in the freezer and use them in the water.
Ideally put the hops in a hop bag one of those used in the supermarket for your produce are good add a couple of SS dessert spoon to weight them down and some fishing line attached to the bag so you can retrieve the bag after dry hopping a minimum of 3 days IMO then remove and cold crash for 3 days then bottle but make sure fermentation is fully finished before crashing

I also find that some yeasts drop clear much quicker than others. FYI My MJ Juicy did drop clear however when I use crossmyloof 5 everything seems to drop clear very quickly even if I don’t want it to!
T

Wow!!!
Thank you all for your expert advice and knowledge. I never knew there was so much to it all. Perhaps I may just have to brew standard kits without the hops as they have been more successful and I don't need to worry so much. My lager is the same as in the photograph above from RoomWithABrew. I'm sure it will taste fine once fully conditioned but probably like others, I always feel if it doesn't look good......it won't taste good. The eyes have a way of telling the brain some things. I've had cloudy beers in the pub before and no matter what the landlord says, there's always doubt in the back of my mind.

Glad we can try and help. You mention fully condition, normally need a few weeks from bottling to opening for conditioning if kept warm for the first week or so and then moved to a cooler place where some settling can occur.

If all else fails and it tastes good buy a tankard. One pub I used to drink at in Bristol would only serve their beer ( rumoured to be relabelled Directors ) from Tankards and boy did it taste good. Same for their one lager as well.
T

..... The tankards a great idea - Either that or a blindfold.
The kits I've recently been making are 2 weeks in the fermentation vessel followed by 2 weeks in my boiler cupboard once bottled, then out to the garage for a minimum of 2 weeks. My Australian lager, Cider and Golden Ale have all been very successful and crystal clear so I may just have to stick with them.
Many thanks to all once again

Tankards can be found in charity shops pretty cheap sometimes.
Got my best one here in Wellington it's a 2 pint glass bottomed one for the Wellington boys college sportsday longjump, highjump and sprint from before WWII.

Final option is a yard glass, you won't be worrying about the haze after a couple of those.
T

I've also brewed the juicy IPA and it never quite cleared properly even with a cold crash, I suspect it was due to their addition of fruit juice to the recipe.

It tasted lovely though, so ignore the haze and just enjoy the fruitiness

I do think it's a superficial worry. A wheat beer is a glorious thing and they never clear. Often the"hazy" Beers have added wheat to enhance the "haze".

Try Hoegaarden, Erdinger, Blue Moon or even Aldi/Lidls German wheat beer. These are all common place in the big supermarkets. My preference is in that order but all are good!