moto748 said:
To clarify, if you could, please; what ph are you actually aiming for with your wort? I assume you can still get that ph paper we used to use in school chemistry lessons. I'm not familiar with the term RO.
Click to expand...

Between 5.2 and 5.4. I don't use a ph meter as i don't own a decent one so rely on brewing software. RO is rererse osmosis.

phildo79 said:
@BeerCat I was planning on doing a partial mash with 4kg of DME and 500g of brown sugar so I am not worried about achieving a high og. It will probably be around 1.085
Click to expand...

Sorry I missed this. Did you brew it in the end? Plenty of people don't boil spraymalt.

BeerCat said:
Sorry I missed this. Did you brew it in the end? Plenty of people don't boil spraymalt.
Click to expand...

I did, mate. Turned out very well. I normally just add the DME in the last ten mins of the boil but this method worked fine and shaved a good hour off brew day.

BeerCat said:
Between 5.2 and 5.4. I don't use a ph meter as i don't own a decent one so rely on brewing software. RO is rererse osmosis.
Click to expand...

Quick question if I may: I was all set to make this, have the special yeast and the wheat malt and Maris Otter, but just noticed the hops that I thought were magnum are in fact Challenger. Would they be a suitable replacement, or would I be better sourcing some magnum (which would only take a few days)?

Hops I have in the house right now: Perle, Challenger, WGV,

Although I note the amount of hops used in this recipe is very small, only 1/2 oz., so perhaps not so critical?

moto748 said:
Hops I have in the house right now: Perle, Challenger, WGV,

Although I note the amount of hops used in this recipe is very small, only 1/2 oz., so perhaps not so critical?
Click to expand...

Well if your making a German beer i would probably use Perle but it does not really matter as its a yeast forward beer with little bitterness. What is the AA of your hops? I used to make a tea but you could throw some in the mash.

Thanks, BeerCat. I'll go with the Perle, I was hoping you'd say that, I only have a small amount, and it will use it up nicely. Don't know about AA.

Right, to the kitchen!

So Day 5 of this, and this is where I go a bit off-piste, cos BeerCat kegged and I don't keg. Thus far, the beer has just been in a bucket, only loosely covered. I just transferred it to demi-johns under fermentation locks. It tastes pretty much like flat, warm weissbier, which I suppose is fair enough. Not very 'sparkling', minimal tingle on the tongue. I'm am thinking, leaving it in demi-johns only a day or two, and bottle it tomorrow or the day after. Gravity right now is a satisfactory 1010 (lower than I usually manage! But I put that down to the yeast). I did put a bit of sediment in each demi-john too. I had been considering bottling with no priming,, but now, having tasted it, I think I will add my usual half a teaspoonful of sugar per bottle.

Attempted pic of above:

Bottle with priming sugar. I would do a teaspoon a bottle and put one in a pet bottle so you can see when i hardens up. 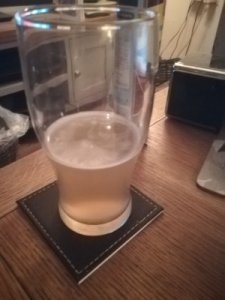 Well I tried it! I would never normally try a beer I only bottled on Monday (!), but in line with "grain to glass in a week" boast, I thought I might...

But hey, really pleased, it tastes just like weissbier! Colour is good, not all all flat. That one had been in the fridge for an hour or so, probably would have benefited from being a bit colder. But it's a summer drink really.

I didn't see your post before bottling, BeerCat, but I went with 3/4 tsp of sugar per 500 ml bottle in the end.

As you can see, I'd drunk most of it before I remembered to take a pic...
Last edited: Sunday at 2:57 PM 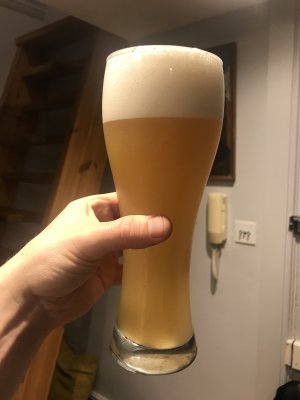 Actually 8/9 days, a few creases to iron for the next one but was a very passable wheat beer

Glad it worked out for you. Those beers look great!

I will be doing it again in the summer! I did end up adding a little sugar, which I hadn't intended, because the OG was a tad low. But I reckon that's because I started out with rather too much water. It depends on your sparging, I suppose. I went with 29 litres of water to start with. I reckon if I cut that down to about 26 litres next time, I could lose the sugar and achieve the recipe gravity. And bottling, rather than kegging, didn't seem to cause any probs either. So very pleased, thanks very much!
You must log in or register to reply here.
Share:
Facebook Twitter Reddit Pinterest Tumblr WhatsApp Email Link