I pap-on a bit regarding dispensing and CO2 arrangements, it's about time I let on where I'm coming from. 18 months into the build (longer than that if including the planning) I'm finally getting near to the end of my dispensing arrangements (i.e. bar).

The CO2 arrangements are the work of a potential lunatic. The piccie is of the "cask breather" arrangements (you don't want to see what's in that closed "keg" box). I've just been rerouting the CO2 tubes because some of the pipes got crimped shut when the box was closed - curly "pig-tail" adaptable routing does the job (one day I'll catch up with ideas that have probably been around since the year dot). 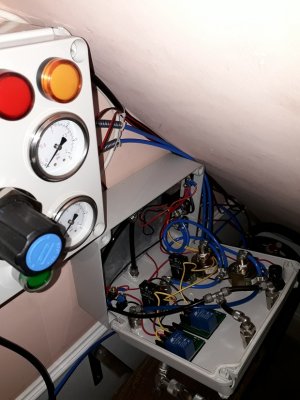 The electrics supply solenoid valves that shut off the gas going to kegs and beer going to taps (I'm paranoid about leaks losing my beer and gas).

I'm probably building a "man-cave" so chose a suitable paint for the walls - pink. 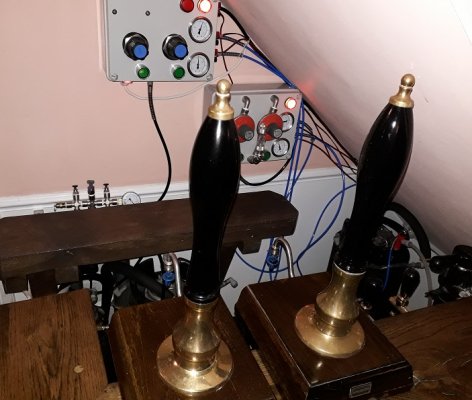 Still a chaos of pipes and cables, but getting there. Once tidied up a bit more I can start dressing the area up. The bench was a tricky addition - it's not really to sit on (why'd I want to do that), it provides support and a "bumper" when arranging stuff in such tight confines.

Five taps: Two handpumps, two free-flow (keg) taps and a Pegas counter-pressure bottle filler (far right) so a bottle or two can be quickly grabbed before heading outside.

Keeps me busy when not actually brewing beer.

Crikey all those panel and pipes looks too much like work...in the sense the place I go to earn money!

Have you got room to fit behind and pull a pint

I have no idea what you just said

Clint said:
Crikey all those panel and pipes looks too much like work...in the sense the place I go to earn money!
Click to expand...

Aye, about right. I do these things to prove (to myself) I can still do these things (i.e. work for a living). Trouble is, it takes me so long I'll never be able to do it to earn money.

The idea behind it all is all the complexity is hidden away out of sight (eventually), so all I have to do is plug in my newest beery creation and press a button. What I "conveniently ignored" is who fixes it when it decides to have a breakdown?

Dads_Ale said:
Have you got room to fit behind and pull a pint

Yeap! I can sit on that bench while doing it too. The bench is there so there is no temptation to sit on a keg (those disconnects on the Corny kegs just aren't comfortable).

But to be honest I just use the bench to lean on when reaching across to operate the pump.

Probably the most useful "feature" I developed while building the bar is the means to shut the hand-pumps: 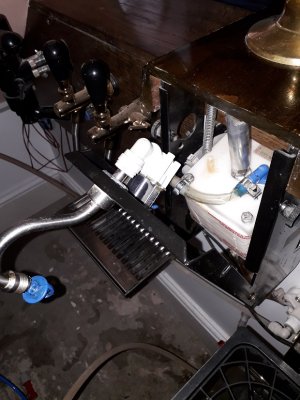 (Okay, so the flooring hasn't been laid yet - this is still work in progress). A solenoid valve is attached to the back of the hand-pump nozzle so the pump cylinder is closed to the air after use. This keeps the beer in the pump cylinder "fresh" between sessions. One of the inconveniences of using hand-pumps is having to flush them out all the time because beer remaining in them after a session will be quite nasty by the time it comes out in the next session. Sealing the nozzle from the air between sessions fixed that. To prove it, because the beer being served is "cask conditioned" it will undergo a tiny amount of secondary fermentation in the cylinder so when the nozzle is opened after a day or so the pump has a brief "cough" that conveniently clears any stale beer in the nozzle.

This is an Angram CQ pump. Space to fit solenoid valves in other pumps will vary.

Note the short length of pipe between nozzle and cylinder has been replaced with PVC tubing. This is very important. The tubing used by the manufacturer is silicone which (although very flexible) is very permeable to gases and if left in place will undo any efforts to seal the cylinder. That took me a while to figure out.

I've drunk beer that's sat in the sealed cylinder for four days, and while it was not at its best it was sound (previously the first pump of the day had to be ditched, and I was always suspicious of following pumps because they were probably rinsing out any remaining bad beer).

The reason for doing all that work in the preceding post was I quickly got fed up of rinsing the hand-pump before I could have a beer, or worse, using an alternative to the hand-pump to get a beer. But the pump, like all the beer-lines, still need a rinse every now and again or they get manky. And after rinsing the first beer out was watered down with rinsing water that couldn't be drained out of the pipes. So … 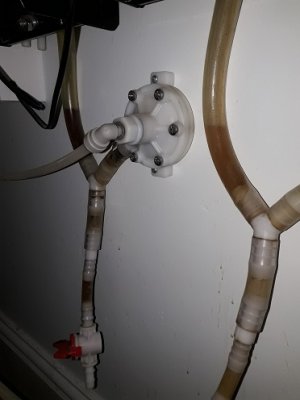 Fitting a drain tap at the lowest part of the pipe-work running to the pump was a smart move.
Last edited: Aug 19, 2018

I'm having a bit of a problem with the next step in the project. Is there anyone who can give me a hand? … 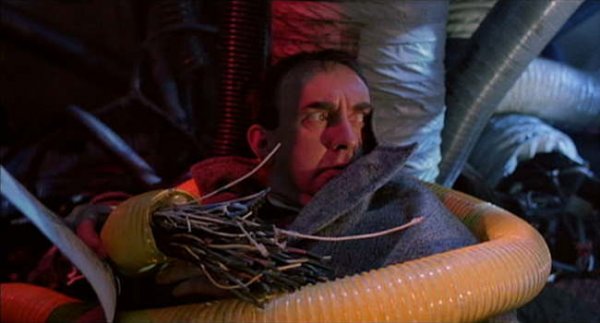 Another "feature" to hi-light …

I mentioned "bubble-counters" earlier, here's one being used in anger. One of the (two) kegs (casks if you like) has got a tad over-pressured in the piccie, about 0.4BAR on the gauge (5PSI-ish), so the bubble-counter has been opened and is merrily bubbling away: 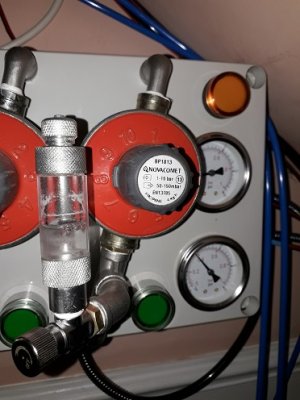 After about a day the pressure will have dropped to about 0.15BAR (150mbar or 2psi) so the needle valve to the bubble-counter is closed again. It doesn't go below 150mbar because the regulator starts opening at 150mbar (or less, these variable regulators can be dipped to 50mbar). 150mbar is about ideal to emulate a freshly opened (and vented) cask.

The bubble-counter allows for very slow depressurising, because releasing the CO2 in solution in the beer is very slow. This is impossible to manage manually without LPG regulators. Manual CO2 management would also be very risky with hand-pumps which are quite capable of creating enough suction to drag potentially mucky air into the keg/cask past seals (especially Corny keg seals). To give some perspective you can use your lungs to blow more pressure into a tube than 150mbar. As I've said before, CO2 handling for "cask-conditioned" emulated beer ("Real Ale", where commercially there should be no extraneous CO2 management) has to be many magnitudes more delicate than for keg style beers.

Note the regulators are arranged with outlet pointing down. Condensation does form in the gas inlet pipes of the keg/cask and you don't want it to accumulate in the regulator.

I did promise to keep this thread up dated with useful hints and tricks, and here's one I missed:

I have a shelf-cooler behind the bar. The "python" lines feed cooling coils on the kegs (three turns) which was keeping them about 15-16C over the hot Summer just gone. I prefer the slightly warmer 15-16C to the "standard" cellar temperature of 12-13C. The coils could cool a little lower (perhaps down to 12-13C). But the "python" lines are not in use over Winter and are ripped out presently.

The cooler's "product" lines (2 cooling coils in my cooler, you can get 4) are used to get some beers served at lower temperatures. The problem with product lines (and kegerators) is they all serve at the same temperature (4 coil coolers can have two long, two short, coils to give limited flexibility). So I fitted "shunts" (shortcuts) with variable flow regulators so I can alter the serving temperature to whatever I like: 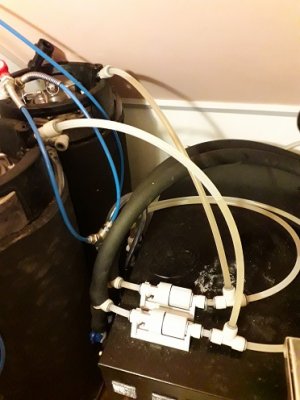 The cooler is on a timer to run 30 minutes every day to keep the "ice wall" intact.

This was the solution I plumped for after many posts in this forum (and others) for alternative to Kegerators (which I had no room for anyway). I also dismissed air coolers along the way because they needed too much installation, were expensive to run, and (like kegerators) had little flexibility.
You must log in or register to reply here.
Share:
Facebook Twitter Reddit Pinterest Tumblr WhatsApp Email Link