The Range Store - Make Your Own Red Wine Kit.

I have made many gallons of their Rose and White wine kits but have never tried the Red my hand was forced when we went to the store (in the next town) *only to find they were out of White and Rose so hey ho at £18.74 for 30 bottles its worth a gamble.

* Edit 27-7-19.
We have since found out they were running stocks down as they are re-branding the Make Your Own range of wine kits and the new ones should be available shortly.

Features
Information
This Red Wine Kit brews a light-bodied, fruity, easy drinking, dry red table wine. This make your own red wine is structured and lightly oaked with intense, ripe berry fruit flavours that vividly reflect blossoming fruity berries at their best. This particular red wine from our selection of home brew kits is a great accompaniment to food and will be ideal to sip on whilst eating a meal. That isn't to say that this red wine can't go it alone, as there is more than enough flavour and delight for it to be enjoyed on its own. 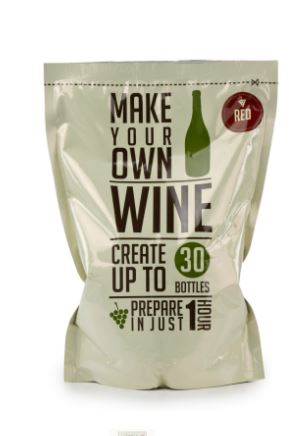 A review by @Gorty from 2014 i assume the quality and end product are still the same.

I have seen review for The Range 'Make Your Own' white, rose and cider so I thought I could add my review of the red. So far I have made two lots of 5 gallons of the red, with a third just started, one important thing, they warn you to put the FV onto a tray or the like as it can be quite an active ferment, they ain't kidding, luckily I use an oversize bucket about 7 gallons in old money, I also put it in the bottom of our airing cupboard which is heated by a simple electric bar heater with a thermostat set at 24 degrees centigrade.

The kit contains red concentrate in a plastic pouch with five sachets of, yeast, oak chips, stabiliser and two finings and instructions in a side pouch of the container.

Just a point to the unwary, make sure you stand the pouch upright before you cut it open, both pouches are opened at the same time.

Add the concentrate with 5 litres of boiling water wash out the pouch, dissolve 3.5 kg of sugar and top up to 23ish litres with cold water, when the temperature drops below 30 degrees C add oak chips and yeast. As it was the warmest part of summer the cooling down took hours, so now I add 3 litres of boiling water and top up to 23 ish litres and the temperature is about 27 degrees C.

Into the airing cupboard, the aroma of fermentation spread throughout the room, much to my daughter's disgust, it's in her bedroom!

Out of the airing cupboard and add the stabiliser, and finings 'A' stir to degassfor several minutes, they say two but I found that four or five aided the clearing, wait for an hour add finings 'B' stir again for 10 seconds and put to rest in a cool place.

After 3 days, checked to see if it was clear and had a problem, this wine is such a deep red you need to rack some off and use a torch to see if it's clear! Thankfully it was. I use lemonade bottles to bottle it into and get 11 by two litre bottles plus if you're as tight as I am you can carefully get about another litre off the lees to settle in the bottle.

It is a little rough and very dry if drunk straight away but I add a small amount of lemonade to a glass. They do say that after two or three months it rivals commercial wines, one day I might even find out!

Well at least they are honest with the description of it being a light bodied red as there are plenty claiming full bodied red in the kits, even the better ones like CC and Beaverdale still drop a little short of the full bodied description although good wines. Sounds good for the bucks as a light drinker @ 60p a bottle

I don't like full bodied Red so have a feeling the light bodied red will be fine, i haven't made the white version for quite a while as we prefer the Rose, i am looking forward to trying the red and will leave feedback.

I have made a few of the cheaper red kits and as long as you use commonsense and realise that they will turn out lighter they are quite pleasant and like a rose/red wine crossbreed. I have nearly always enoyed them and I am sure that as you use the other Range kits it will be just as good as you expect

Thanks, I have read the reviews on the site and looks like a winner.

Nicks90 said:
Makes me wonder if dropping a kilo of sugar and brewing short by a gallon would give a better fuller bodied wine
Click to expand...

I've tried this with cheap kits and it just throws out the acid balance (makes it very acidic) if you make it too short and does't really improve the body.

I have read many threads about red wine kits and am fairly sure unless you are going to spend a lot of money you will always be disappointed with the end result.

So, rather like a Lady of the Evening, then (so I've been told).

Rodj said:
So, rather like a Lady of the Evening, then (so I've been told).
Click to expand...

Like I said, if you come up short they can be very acidic.

Chippy_Tea said:
I have read many threads about red wine kits and am fairly sure unless you are going to spend a lot of money you will always be disappointed with the end result.
Click to expand...

Solomon Grundy reds are ok. I brew short to 21 litres instead of 23

LED_ZEP said:
Like I said, if you come up short they can be very acidic.
Click to expand...

The Red took a bit longer to finish than the White and Rose, we tried it when we first bottles it and we were impressed and now a week later its even better (that might just be in our heads) i will be buying this kit again as it is better than the Rose wine kit.

This is a very saddening thread...

......I am in Twickenham - and miles from any range store - unless I wish to increase the per bottle price to exorbitant values with petrol and parking. Oh well back to the [ just finished ] 2 gallons of red made from 100% Waitrose grape juice. At 7 weeks old its sparkling clear-if you decant into a wine glass an hold up to light . A very well bodied wine. I think this should improve well with age. The WOW with 2 bottles of apple juice and one of Pineapple juice + one Wilko grape juice concentrate is now also diamond clear - and 5 weeks old. It must be OK as the missus drank the entire taster glass

although I thought it a little light bodied. I will put this away and revisit in a few months. Time to get on with the 5 bottles of Merlot grape juice in the fridge - when the pergola is finised that is. Have to say that the juice selection at Waitrose is really excellent.

Rack&Ruin said:
This is a very saddening thread...

......I am in Twickenham - and miles from any range store - unless I wish to increase the per bottle price to exorbitant values with petrol and parking. Oh well back to the [ just finished ] 2 gallons of red made from 100% Waitrose grape juice
Click to expand...

We are lucky as our Range store is in the next town where we already travel to do our monthly shop, if you are ever in the place where your store is grab a kit and see what you think.

I wonder if it would be worthwhile someone here buying the kits and offering a postal service to other members?

I have a Range very near me, but no Wilco's for miles. So I have the same problem with that.

I'm off for a day on the East Lancashire railway next week - and Bolton is near. Anybody know if Bolton sell these kits....the website is like trying to push butter uphill with a red hot needle.

Although I have a Wilko near me I only use the web ordering as the store is useless. SO..the thought occurred to me do Range do postal deliveries - like Wilko ??