I thought I was a bit behind seeing as (I think) @An Ankoù and @Clint have already brewed this.

I'm sure a 3 month conditioned Christmas Ale will be lovely.
Click to expand...

Brewed and bottled.
It's totally chocolatey. No chocolate in it though. Can't wait to see what it's like when it's conditioned.

Brewed mine yesterday, I used cocoa powder in the mash instead of nibs as I couldn't get hold of any. Tried the wort before the hops were added and it tasted like chocolate horlicks

Just been given a Admirals reserve kit, any advice for additions to this kit to make it suitably Christmassy appreciated or keep as is and do a separate Christmas brew? Effectively will be three months in the bottle too short?

HSD said:
Just been given a Admirals reserve kit, any advice for additions to this kit to make it suitably Christmassy appreciated or keep as is and do a separate Christmas brew? Effectively will be three months in the bottle too short?
Click to expand...

It's made to produce 32 pints of 5% abv. If I were knocking it up, I'd keep it as it is. Woodford's is tasty beer anyway. If you want to make it a bit pokier, you could brew it short to 27 pints, which should give you around 6% abv. Three months in the bottle is about right, but you're going to need 2 or 3 weeks fermentation before you get it in the bottle so get cracking!

How's everyone doing with this? I'm gonna check the fg in a moment to see if it's budged off the 1.023 measured about 8 days ago.
Plus...I'm debating whether to keg it in my Wilko keg which now seems to be behaving or to bottle ...

Got the ingredients now (mostly). 10th October is a good day for a Christmas Beer brew (well its a Friday and that's when I made Christmas Beer last year!).

Clint said:
How's everyone doing with this? I'm gonna check the fg in a moment to see if it's budged off the 1.023 measured about 8 days ago.
Plus...I'm debating whether to keg it in my Wilko keg which now seems to be behaving or to bottle ...
Click to expand...

If it's ready for packaging, three months+ is a long time to tie up a keg. Unless you've got loads of kegs. of course.

Clint said:
How's everyone doing with this?
Click to expand...

Been in the (plastic) FV for about 4 days. It had a domed lid after about 45 mins which surprised me as I'm using dry yeast.
Oh - and I nearly forgot to put the nibs in - queue dash to the kitchen to grab nibs, wort, pan etc to boil them lastminute.com

A bit worried about mine as it got a little hot in my brew cupboard (24-25°C) and London 3 yeast is recommended 23°C max. I'm hoping it just adds a bit of fruity character to it and any harshness ages out by Christmas.

I thought we were done with the hot weather damn it!

I ordered the ingredients for mine a couple of days ago, hoping to brew this weekend.

I've just kegged mine in the Wilko keg...a lot less messing than bottling..

Mines in the fermenter now, complete with homemade invert sugar. I've no idea what number it came out at, but it was pretty dark. The OG is 1061, so I am happy with that

Checked mine today and it's at 1.018. The brew father app predicted 1.019 so that should be alright. Gave it a taste too and it hasn't suffered from hitting 25°C during early fermentation. I'm getting chocolate, coffee, and some nice fruitiness

It's still got a thick krausen though which is odd. Has anyone used Wyeast 1318 London 3 yeast before? What's your experience with it?

Edit: I opened the cupboard to check on it and caught an airlock bubble so there's still a bit to go I guess, I'll check on it this weekend and maybe give it another week after that.
Last edited: Sep 29, 2020

Tastes v chocolatey, which is no bad thing in my book. Looking forward to trying these.

Oh. And it appears to have a bit of funky stuff on top but certainly no worse than any other photos I've seen on here previously, so I'm going to let that ride and see what happens.

This thread on HBT may be worth a read re: chocolate additions.

If you've yet to brew a big beer, it might be worth thinking about partigyling it with a smaller beer to give you something to drink whilst you wait for the main one (but don't just use the second runnings for the small beer, use a fraction of the first as well, as the best flavour is concentrated in the first runnings).

If you've ended up with something on the strong side, this has some suggestions for keeping your yeast happy. 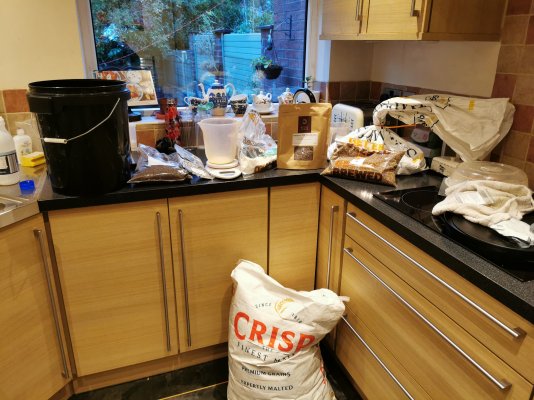 Today is the day for me, I would have liked to stuck to the 'official' brew weekend and brewed with everybody else but can't guarantee that I would have had the time

Bit of advice for anybody who like me kept their sugar invert in the fridge, I couldn't get it off the spoon to measure it so I first measured a jug of boiling water and then added the invert to that, placing it in the boiling water meant that I could get it off the spoon
You must log in or register to reply here.
Share:
Facebook Twitter Reddit Pinterest Tumblr WhatsApp Email Link